The unique problem with this issue was that the intranet was accessible only to 6 of the participants in the workshop. For this very reason, getting the "right" method for this session was critical for its success. I decided to try out a brainstorming method! Here is how the session went: 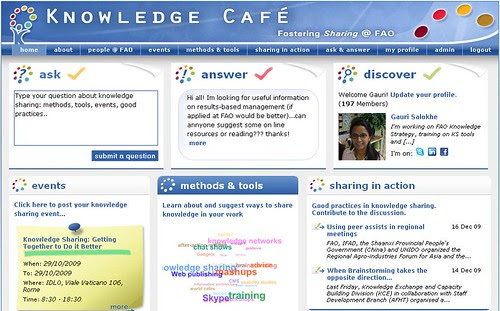 The K-Café is a intranet Web site which offers a set of features and functions providing the best the virtual world can offer to optimize face-to-face and online interaction. The purpose of the K-Café is to provide a platform through which people can connect and share with each other their interests and ideas, in the spirit of knowledge sharing. Users can learn about colleagues who have a picture and profile, blog or comment on a posting within the Sharing in Action blog, ask a question, give an answer, and propose an event. The site also provides directory of knowledge sharing tools and methods.

In terms of promotion, the site has been announced on the log-on page, the intranet as well as through divisional registries. A newsletter is sent out every week with all changes to the site (latest events, posts, members, etc.). The current statistics (eliminating the visits from those who manage the site) show that the site is visited approximately 1500 times a month.

The K-Café was launched in May 2009. Since then it has seen steady growth in participants (now up at 197). The Sharing in Action blog has been the most active component of the site. The question and answer section, which had as its aim to facilitate dialogue and discussion around issues and hurdles related to knowledge sharing has been slow in uptake.

We think the rate of adoption (in terms of profiles created, questions asked and answered, blog postings made/commented on, and connections with others who can provide relevant expertise) of the K-Café should be faster than at present. We want to see what we could do in order to increase the rate of update; bearing in mind the time we can devote to working on this is limited.

So, the key issue was framed as:

What will it take for a corporate tool such as the Knowledge Sharing Portal (K-Café) to encourage and cultivate knowledge sharing in an organization?

Method Used
The method used for this session was a combination of the brainstorming method and card-sorting; it consisted of the following steps: 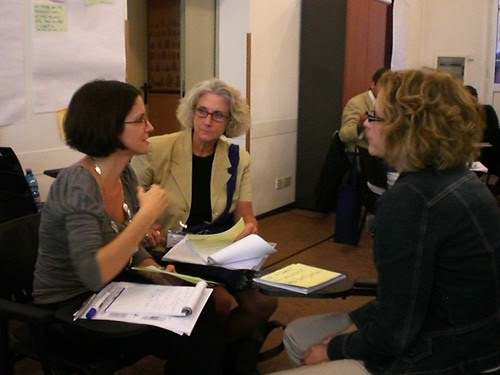 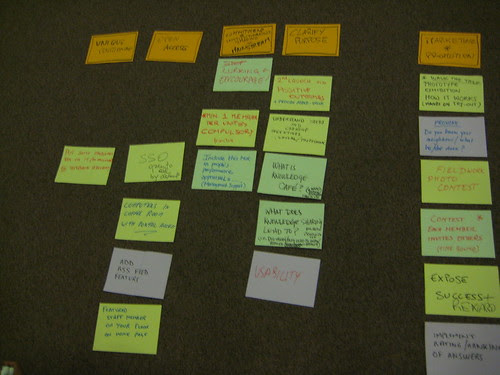 The last step included looking at each column and finding the "action item" to group the ideas together (keeping the question in mind).

Results
For the K-Café to encourage and cultivate knowledge sharing in the organization, the following ideas emerged, amongst others:

1. Ensure unique positioning by putting some production tool on the K-Café that is unique, if not exclusive (i.e., a telephone directory)?2. Clarify the purpose of the K-Café:
3. Promote the K-Café
4. Ensure best possible usability
After Action Review on using the method

What worked well:
What did not work so well:
What to improve for next sessions:
Related posts: