Tweet
Earlier this week, my colleague @nadejdaloumbeva and I (@gaurisalokhe) facilitated an Open Space session. The session was the first, to my knowledge, of its kind in my organization. The session was organised by the climate change study circle, a cross-cutting area of work needing expertise from all parts of the organization. Although there is a more formal structure for ensuring that knowledge sharing takes places between different parts of the organization about climate change, it is primarily at a higher level and also more formal. The CC Study Circle, on the other hand, is informal, cross-cutting and has participants from all levels. 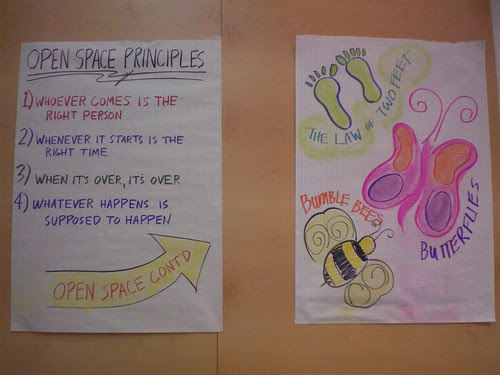 The Open Space started with introductions to the day and its focus on climate change related issues. Once this was done, Nadia and I explained the four principles of Open Space, law of the two feet and started with explaining the process of agenda creation. 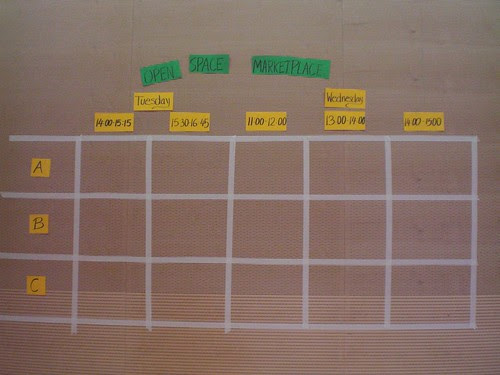 To ensure that the 55 or so participants would understand the process of creating the agenda, where they are asked to write topics/issues/ideas that they wish to discuss on a piece of paper and put it on the board, we had planned that two of the organizers of the event will enact and start the process. Once they started, people started coming one by one to post their ideas on the agenda. During this process, there was also discussion about overlapping topics and possible merging of sessions. This was then carried into negotiation phase which allowed participants to reorganise the agenda further. The negotiation process is crucial because it helps clarify the real issue and understand better the idea of the convener in calling for that session.

At the end of the day, we did a quick debrief on the outcomes of the day as well as the thoughts of the participants on the new, informal process.

Here are some of the key lessons learned in terms of what worked well.
What could be improved for next time?
For me, it was a great experience as it showed me that there is an opportunity for events of this nature in my organization. The beauty of this method to me is the self-organizing nature of the agenda and the sessions. With a very broad theme like climate change, this method is fluid and easily extensible wherein participants can modify the agenda throughout the day so that they can make the best of the event without being bound to pre-cooked agenda.

I would like to thank the climate change study circle organisers, Claudia Hiepe and Marja Liisa TapioBistrom, for inviting me and allowing me to be part of this exciting experience and development! The event ended on a positive note, I hope this is just the start!
Posted by Gauri Salokhe at Thursday, July 09, 2009

Reading this I had a thought about KS in the org, that might be worth more though... In this case the organization has both a formal, high level group for KS on climate change, and the informal CC Study Circle. Is there anything in this "parallel" existence of 2 groups that leads to more successful KS? It might be a good model for the organization.

Thanks Michael for your feedback. The commonality between the formal/informal is that the formal one is lead by the same person who "supports/encourages" the informal study circle. Else, there is very small overlap between the two because in case of the formal structure people are nominated whereas in the informal one anyone interested in the issue of climate change can participate. This participation can range from top management and technical officers to newly arrived volunteers or consultants from any part of the organization.

We need more of these informal cross-organizational-structure communities to flourish to improve level and flow of knowledge within the organization, especially in areas such as climate change, biofuels, etc. These, however, will need to be supported/encouraged by the management. Often management is needed, in our setting, to support initiatives such as the Open Space.